The Ghosts of The Tower of London Part 1

The Ghosts of The Tower of London Part 1

Over the coming week, I hope to lead you on a journey of discovery and adventure. Briefly taking a glimpse into a past so horrid. Of haunting tales and ghastly ends that awaited so many of her most famous occupants. Firing your imagination, so that you will delve deeper into her history for yourselves. 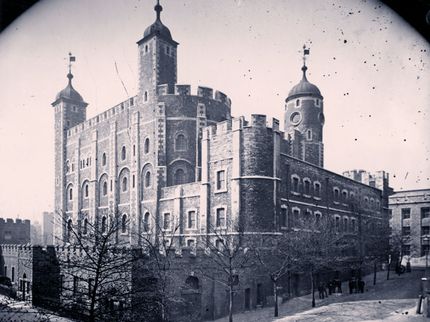 During her long and illustrious 900 years, The Tower of London has developed into one of the most haunted places in Britain. She has been home to beheadings and murders, torture and hangings, as well as being a prison to Queens and Nobles alike.
Thomas A. Becket is “the first reported sighting of a ghost at the Tower of London.”

During the construction on the Inner Curtain Wall in the 13th century, Thomas appeared apparently unhappy about the construction, and it is said he reduced the wall to rubble with a strike of his cross. Henry III’s grandfather was responsible for the death of Thomas Becket, so Henry III wasted no time building a chapel in the Tower of London, naming it for the archbishop. This must have pleased Thomas’ ghost because there were no further interruptions during the construction of the wall.

The Bloody Tower was the scene of the infamous disappearance of the two princes; Edward V (12) and Richard Duke of York (10), who are thought to have been murdered in 1483 on the probable command of the Duke of Gloucestershire, who was to be crowned Richard the III. According to one story, guards in the late 15th century, who were passing the Bloody Tower, spotted the shadows of two small figures gliding down the stairs still wearing the white night shirts they had on the night they disappeared. They stood silently, hand in hand, before fading back into the stones of the Bloody Tower.
These figures were identified as the ghosts of the two princes. In 1674 workmen found a chest that contained the skeletons of two young children, they were thought to be the remains of the princess, and were given a royal burial not long afterwards.

The story of the little princes is still to this day a heartbreaking story. They are “among the most poignant ghosts” in the Tower of London.
The most persistent ghost in The Tower of London is the ghost of Queen Anne Boleyn. The King, Henry VIII, after learning the baby she carried for nine months was a boy and still born, accused by her of infidelity. She was taken to TOWER GREEN and was beheaded on May 19, 1536. Queen Anne appears near the Queen’s House, close to the site where her execution was carried out. She can be seen leading a ghostly procession of Lords and Ladies down the aisle of the Chapel Royal of St. Peter ad Vincula.

She floats down the aisle to her final resting place. Queen Anne is buried under the Chapel’s altar. Her headless body has also been seen walking the corridors of the Tower. Sir Walter Raleigh lived quite comfortable compared to others who were imprisoned within the walls of the Bloody Tower. His “rooms” are still furnished as they were in the 16th century, and can be seen when visiting the Tower today.
He was executed by James I, and has been seen looking exactly as he does in his portrait hanging in the Bloody Tower. I hope you have enjoyed Pt1 to The Ghosts of The Tower of London. In Pt2 we discover what happend to Catherine Howard and Lady Jane Grey as well as the Horrific end to the Countess of Salisbury. If these tales have brought your imagination back to life and you want to discover more ghostly and gruesome stories of times past. Then pay a visit to my Haunted Castles page where you can find out about the grisly goings on at Windsor Castle or read about the Heroic tale of the Two Brothers of Berry Pomeroy Castle in Devon.

Haunted Houses: No Longer a Mystery